The All Seeing Arrays 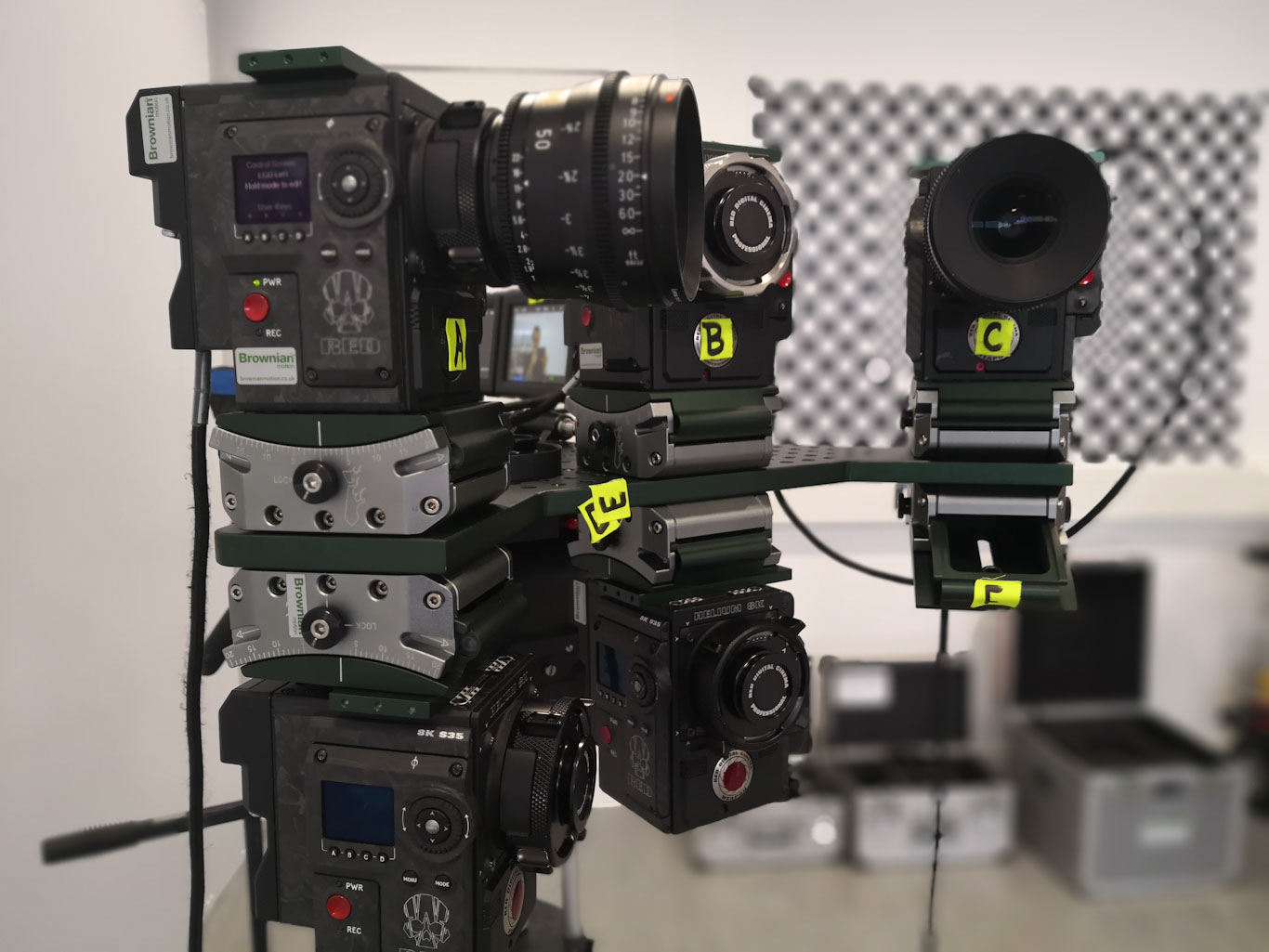 One might not immediately think of using vanilla NukeX when it comes to the stitching of video footage, but NukeX, with its built-in 3D system, provided a complete toolset for the things we set out to accomplish in our collaboration with Brownian Motion and the construction of their various rig configurations.

We used Nuke to create 2 different things for Brownian Motion – a Nuke stitch template and a virtual, customisable rig array.

The Nuke stitch template was created so that we could have complete control over the stitching process during the development of the various rig setups with Brownian Motion. Using this template, we could test and troubleshoot each and every rig configuration and provide Brownian Motion with realistic stitch dimensions for the various camera setups.

The stitch template consisted of a virtual representation of the real rigs we were testing. For example, with the 6-way toed in Arri Mini rig, we would have 6 cameras within Nuke with the same camera placement, general settings and lens characteristics as the real rig so we could project the footage from each of the 6 cameras inside Nuke and quickly get a faithful stitch that could inform us visually on where any problem areas might be, and where there were things that should be taken into consideration with the real rig, such as parallax at different distances as well as stitch overlap.

This stitch template will also be offered to the people who end up using Brownian Motion’s rigs for their projects, so that they will be able to insert the footage captured by all the separate cameras on the rig into the template and see a quick preview of their stitch and have complete control of all aspects of the stitch within Nuke for compositing purposes.

The other tool we built for the collaboration with Brownian Motion, the previsualisation rig, was essentially a virtual version of a Brownian rig, existing within Nuke’s 3D environment, that would allow us to visualise how the plates from the different cameras on a rig would overlap.

This would allow the people at Brownian Motion to quickly visualise what the ideal camera angles, measurements and lens configuration for a given rig would be.

Essentially, the virtual rig built in Nuke consisted of a 3D projection setup with adaptable camera settings such as film back size, sensor resolution, camera placement within the rig, as well as changeable lens configurations. All of this could be tweaked on the fly with instant visual changes that could illustrate the pros and cons of various rig configurations.

The main purpose of this virtual rig was to have an on-set tool available during the test shoots over at Pinewood Studios so that we could instantly preview camera overlap of a given camera/ lens/rig placement configuration before the actual rig was built. This was to save the time of having to actually physically build the rigs and view things through the real cameras first. This way, Brownian Motion could get a better idea of camera overlap at different distances with various lenses and general rig configurations.

Below is the article published in Definition magazine about the Arrays.